Among the many attempts to capture the spirit of a city, the most subjective ones are usually the most successful ones. Stas Polnarev’s series Moscow. Eyesights was not intended as a systematic panorama of urban views. It came about as a natural and almost inevitable consequence of the impossibility of separating the photographer’s view from that of his camera, as an everyday parallel to Moscow life and Moscow travels.

Apart from the artist’s individual perception of the city, the worldly features and artistic properties of the resulting photographs reflect his ability to see, when looking at Moscow, only this and only in this way. The end result is not so much a portrait of a specific place, some urban landscapes and characters populating them, but a portrait of Moscow sensations and an attitude to the city — not as a megapolis, but as a witness, an accomplice, an opponent, a friend.

An unsteady light reducing all forms to quivering ripples, lending themselved to nearly tactile feeling, outlines a geography of reminiscences and encounters. The fuzziness of the picture makes the perception even more accurate, forcing the viewer to feel, beyond this slipping away of sharp forms, some particularly intent gaze of the artist that gradually washes away the outward shells in order to get to the inner essence of things. This ceaseless visual quest, this visual “fumbling” for an image within a photograph inadvertently puts the viewer into a position of a person with bad eyesight, moving gingerly and slowly, whose intuition and sharpened feelings let him discover more than the keenest gaze would, discovering a path to hidden dimensions of the being, to a more nuanced perception of reality. The viewer is always required to make the next mental step, he is carefully provoked to some continuous movement of his view and emotions and forced to feel and evaluate in real terms the difference between the notions of “look” and “see”.

The emotional integrity of the series, the visual affinity of spaces appearing on all the photographs and the slowed flow of time in all the works create a feeling of nearly classical integrity of time, place and action, reproducing from fragments something inseparable and prime. And yet, escaping all the time and passing to the next frame, the spirit of the city never lets us grasp it with any finality or define its properties with any eventual precision. Rather than any events of the past finished once and for all or etherial, unfeasible fantasies of the author, the pictures record the captured “potentiality” that might have once taken place or probably is taking place right in front of our eyes — all at the same time. So, this journey is, rather, a journey in a probable city, whose existence is poised at the borderline of reality, where every phenomenon is unpredictable and inimitable.

The reality of life captured by the photographic lens and going on independently of it, competes with the reality of the resulting work of art, challenging, in its turn, the reality of the fragments of photographic film that sometimes enter our field of vision. But it is the technical “imperfection” — a glitch of the camera or mind — that makes the vaguely discernible object of the image surprisingly and convincingly reliable, honest and unretouched. 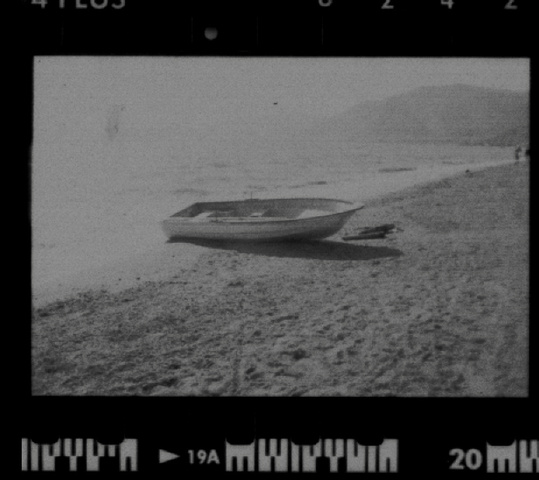