Stella Art Foundation, in collaboration with the Fondazione Musei Civici di Venezia, presented “That Obscure Object of Art”, an exhibition featuring nearly 70 works from the Stella Art Foundation collection, in the majestic surroundings of Ca’ Rezzonico, the Museum of Eighteenth-Century Venetian art and one of Venice’s splendid palazzos. Curated by Vladimir Levashov, “That Obscure Object of Art” displayed works by a plethora of prominent contemporary Russian artists including Yuri Albert, Ivan Chuikov, Ilya and Emilia Kabakov, Vitaly Komar and Alexander Melamid, Boris Orlov, Anatoly Osmolovsky, and Alexander Ponomarev who was present with his submarine “SubTiziano”. Exhibition “That Obscure Object of Art” was on view from June 6 to October 5 and became one of the most important projects of the parallel program of the Biennale. It was visited by over 33,000 viewers, breaking a record for museums of Fondazione Musei Civici di Venezia, whose most visited sites have traditionally been Palazzo Ducale and the Correr Museum.

Having taken place from the 4th of June until the 5th of October 2009, “That Obscure Object of Art” sat at the heart of the Stella Art Foundation’s involvement with the Venice Biennale. The Moscow-based foundation also supports the work of Elena Elagina & Igor Makarevich, and Anya Zholud and the Moscow Poetry Club, all featured in the official selection of the 53rd Venice Biennale.

“I feel very privileged to be introducing Russian art of today in Venice, as part of the 53rd Venice Biennale,” Stella Kesaeva, founder and president of the Stella Art Foundation, said. “The encounter of visual art, poetry and literature which our Foundation presented at this Biennale clearly follows the tradition of the Russian avant-garde of the early 20th century whose aim it was to shape an environment charged with rich, creative energy. Almost a century later, their spirit is as strong as ever, inspiring the creativity of those artists and poets who were Making Worlds at the 53rd Biennale.”

That Obscure Object of Art
Contemporary Russian art emerged from and shaped itself in an environment of double cultural isolation. Its habitat was an underground setting within the Soviet art system which was in turn encapsulated in a country completely cut off from the outside world.  Although this hermetic context resulted in an art which was unique in its structure, its strategies and its form-generation process, it nevertheless perceived itself as an organic part of the global art movement. The complexity of its being was largely ignored at international exhibitions where it was inevitably displayed in an extremely simplified manner: during Soviet times, as a naive humanistic impulse towards political and artistic freedom; after the perestroika, as an artistic symbol of the democratization of a post-totalitarian country.

Vladimir Levashov, curator of “That Obscure Object of Art” commented: “Our most prominent goal with this exhibition was to put forward an alternative to the narrowing and one-dimensional prevalent exhibiting practices, by providing one of many possible “self-portraits" of the Russian art of the 1970s-2000s. Our presentation shed light on the multiplicity of this art which is in the end an obscure object with a complex inner structure.”

In October 2008, Stella Art Foundation used a similar concept for an exhibition at the Kunsthistorisches Museum in Vienna, which was dedicated to the Soviet Universe. The Venetian version was shifting the focus from content to form and internal structures. The exhibition portrayed contemporary Russian art as a practice of constructing multiple worlds, of weaving never-ending stories. This narrative flux dissolved boundaries between authors and their characters, allowing subjects and myths of motley origins form bizarre groupings and textual fragments and images to interlock.


“That Obscure Object of Art” was accompanied by a fully illustrated catalogue in English, with text by Vladimir Levashov.

Ca' Rezzonico, Venice
Ca’ Rezzonico, now the Museum of Eighteenth-Century Venetian art, was designed for the aristocratic Bon family by the greatest of Venetian Baroque architects, Baldassare Longhena, and Giorgio Massari in 1649 – 1756. The most important painters in Venice were called upon to decorate the building: Giambattista Crosato, Pietro Visconti; Giambattista Tiepolo, Jacopo Guarana and Gaspare Diziani. The building was fully completed by 1758, when Giambattista Rezzonico's younger brother, Carlo, Bishop of Padua, was elected Pope under the name Clement XIII; this was the peak of the family's fortune. In 1935, the palazzo was finally sold to the Venice City Council and later was adapted to serve as the Museum of Eighteenth-Century Venetian art. Numerous eighteenth-century works that belonged to the other civic museums of Venice were concentrated in Ca' Rezzonico; the quality of the works exhibited, – by such artists as Giambattista and Giandomenico Tiepolo, Rosalba Carriera, Pietro Longhi, Canaletto, Francesco and Antonio Guardi – together with the extraordinary quality of the architecture and the setting, made Ca' Rezzonico a veritable temple of the Venetian Settecento: an age of splendour, dissipation and decadence, but undoubtedly one of the most lively and fertile seasons of modern art in Europe.

In the official selection of the 53rd Venice Biennale
Stella Art Foundation supported four important Russian artist/collectives in the exhibition curated by Daniel Birnbaum: Elena Elagina & Igor Makarevich, and Anya Zholud, all showing at and outside the Arsenale. 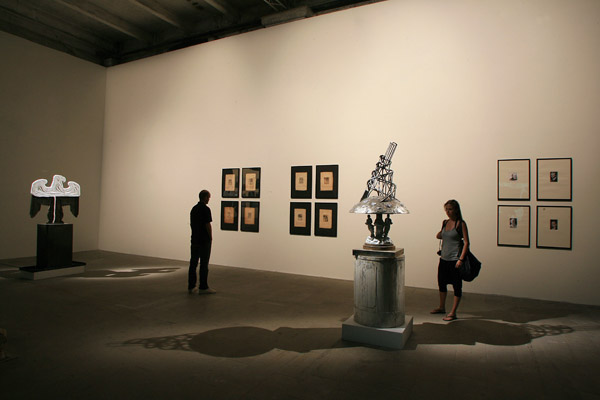 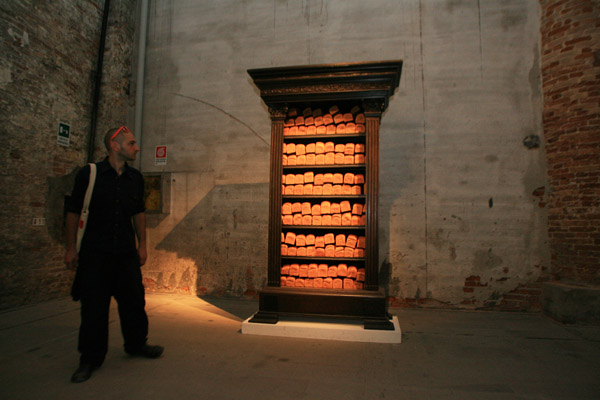 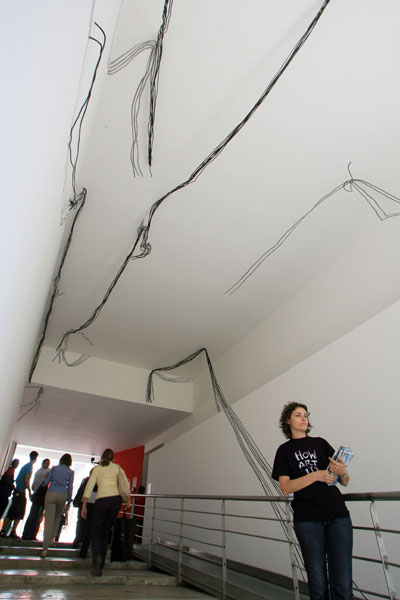 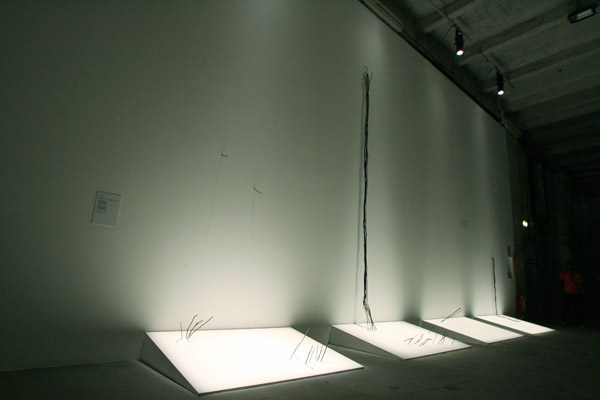 Moscow Poetry Club
From the 3rd till the 7th of June, the Moscow Poetry Club presented poetic performances at the Biennale bookstore in the Giardini, curated by Daniel Birnbaum and Eugeny Bunimovich, which involved Russian, Italian, Greek, Cypriot, American and Austrian poets. 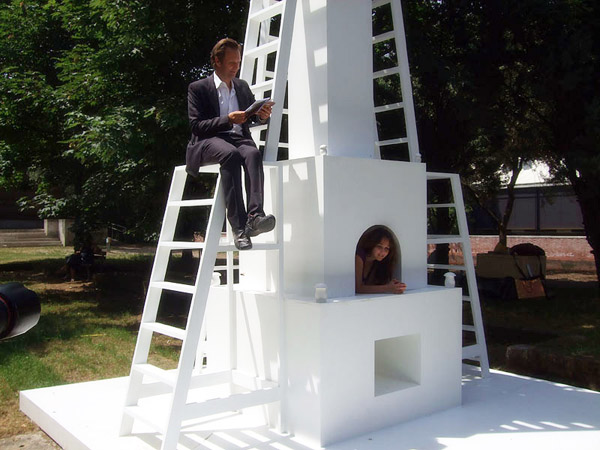 These performances reflected curator Daniel Birnbaum’s aspirations to transcend the traditional borderlines of disciplines highlighted during the Venice Biennale. The offering of bread and water during all the performances was related to the “Common Cause” installation by Igor Makarevich and Elena Elagina in the Arsenale, which operated with bread semantics. While poets were reading their works, artists Alexander Djikia and Anya Zhelud were making real-time graphics illustrating the readers' verses on huge sheets spread on the walls and the floor. The poets from the “Russian Gulliver” project curated by Vadim Mesyats were presenting performances “Gydromachia” (an attempt to charm away floods and rain) and “Resurrection of a Hymn”, based on a reconstruction of Indo-European protohymn. Alexander Ponomarev staged a performance by Vsevolod Nekrasov. La Casa delle Parole (normally housed in the birthplace of Carlo Goldoni, another museum of the Fondazione Musei Civici di Venezia) was presenting modern Italian poetry. 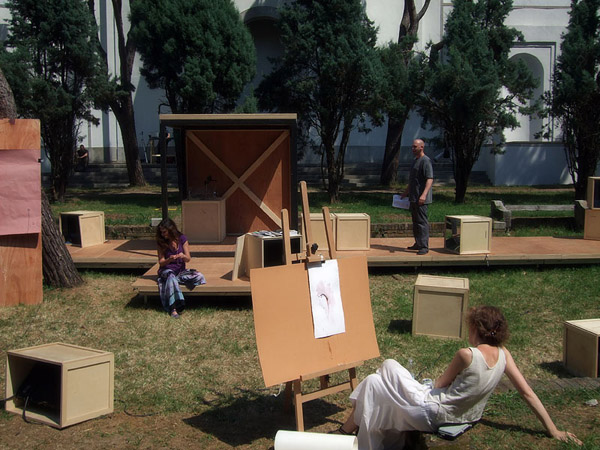 Evgeny Bunimovich, co-curator Moscow Poetry Club commented: “During our poetry readings we offered everyone water to drink and bread to eat in order to have the words “water” and “bread” regain their actual contents. Poetry operates with words, revealing the hidden resources of language and going beyond the normative conceptualization of reality. Five basic elements, five loaves of bread shared among five thousand people — these archetypes were behind the five days that the Poetry Corner ran at the Biennale bookstore in the Giardini.” 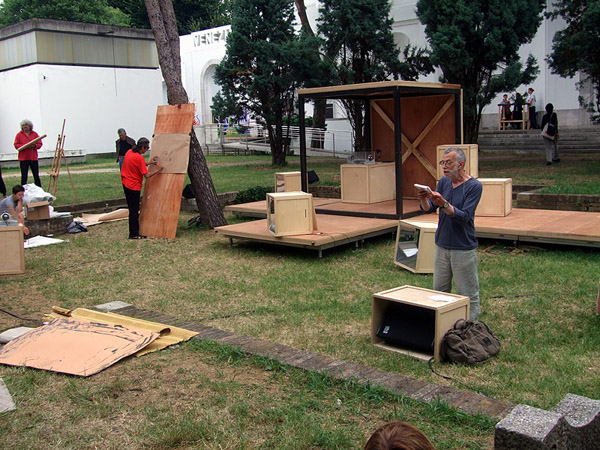 Visual artist Youla Hatzigeorgiou, in collaboration with architect Giannis Epaminondas, designed a wooden crate that unfolded and served as a platform on which poets and other artists presented their works and actions. Through the use of technology, Youla Hatzigeorgiou translated poets’ voices into water surges, which were projected onto the surface of the recipient’s exterior shell. The result was a specifically designed stage to host the world-making event, as suggested by Daniel Birnbaum’s title “Making Worlds”.

These performances were organized by the Stella Art Foundation, the Ministry of Education and Culture of Cyprus, the Federal Agency of Press and Mass Communications of the Russian Federation, the Moscow Government, ArtBOX.gr | Arts Management, the Moscow International Poetry Biennale, Russian Gulliver Publishing House, and La Casa delle Parole. 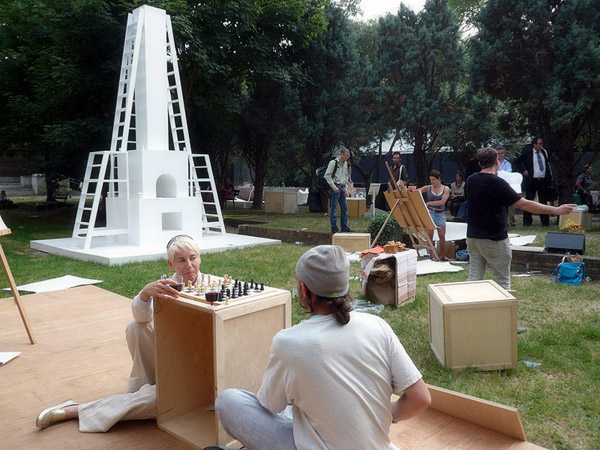 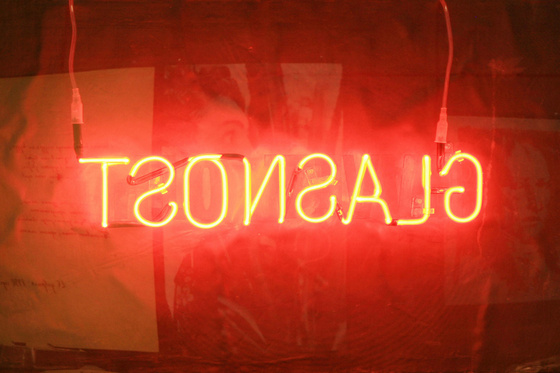