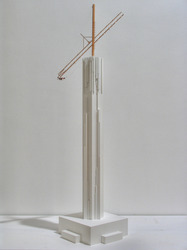 The Stella Art Foundation is presenting “Jupiter’s Tomb” (2003), a work by Yuri Avvakumov on loan from the Foundation’s collection, in the “Russian Cosmos” exhibition, which is at the Multimedia Art Museum until 18 September.

The “Russian Cosmos” exhibition is dedicated to the 55th anniversary of Yuri Gagarin’s first space flight. It is an attempt to trace the mutual influence and interconnections between three phenomena: the Russian philosophical and scientific thinking that made possible the first launch of a human being into space; Russian art from the avant-garde to the present in which the theme of cosmism has been a significant paradigm from the early 20th century to our own time; and scientific artefacts ranging from Yuri Gagarin’s re-entry vehicle Vostok, which is being shown to the public for the first time at the Multimedia Art Museum, to video and audio materials associated with Russian space flight.

The show includes materials from the life and works of the great Russian scientists Konstantin Tsiolkovsky, Yuri Kondratyuk and Sergei Korolev whose work laid the foundation for space science. An entire section of the exhibition will be devoted to Russian philosopher of religion Nikolai Fedorov, who pioneered the vision of conquering outer space and was Tsiolkovsky’s teacher and mentor.