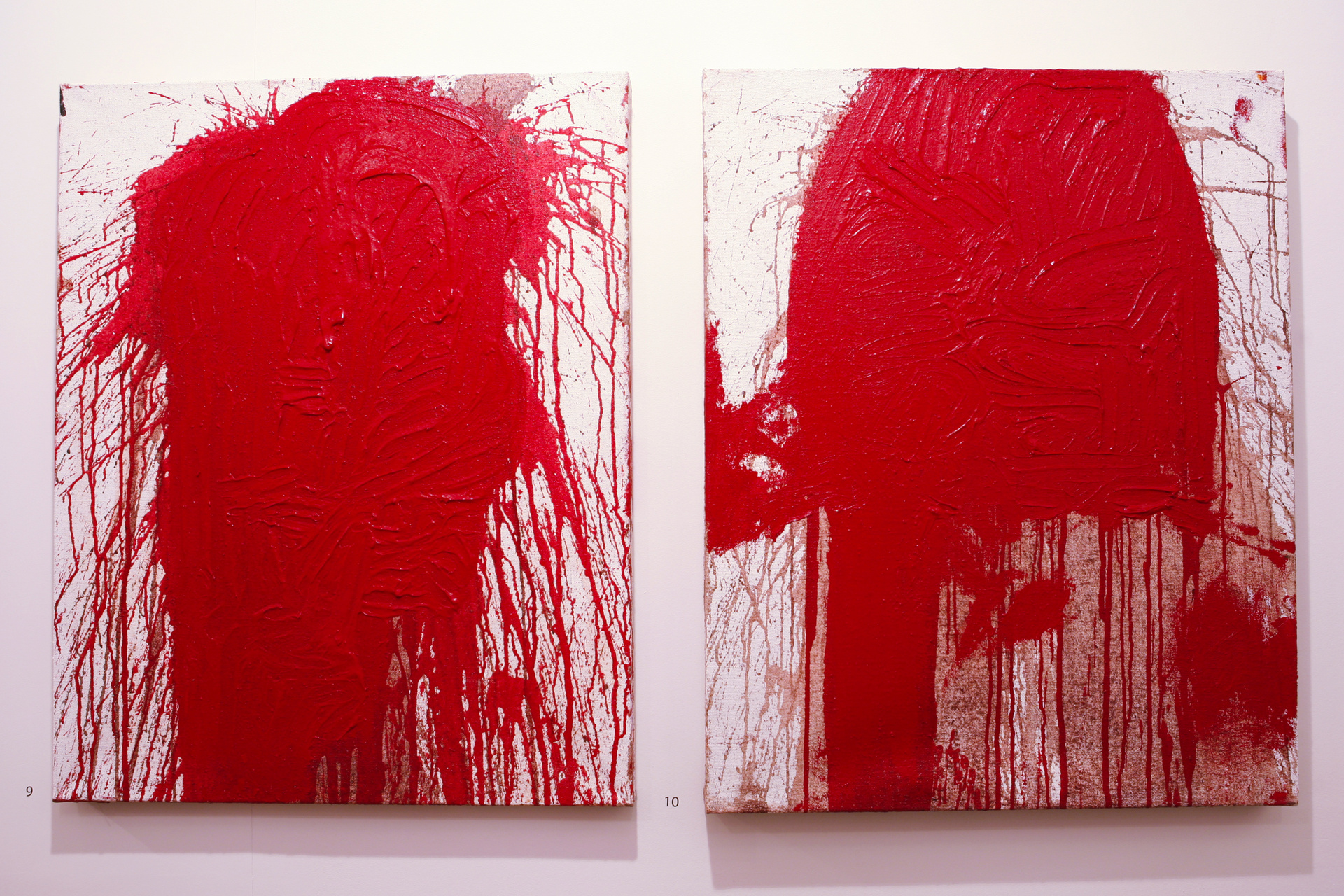 Stella Art Foundation is proud to present the first Russian exhibition by internationally acclaimed artist Hermann Nitsch, one of the founders of Viennese Actionism.

Though it may look ultra-radical, Hermann Nitsch’s art, which straddles the boundaries between history and modernity, Christianity and paganism (his mystery actions, during which he skins animals, smears human bodies with their blood and so on, are ritual sacrifices in which the artist himself, clad in a white robe, takes on the mantle of a high priest) is part of a centuries-long artistic and cultural tradition. Medieval painting, Rubens, Nietzsche, Freud, Wagner, Klimt, Schiele, Schoenberg are the sources of his creative inspiration.

The principal subjects of his mysteries are those of sacrifice, suffering, death and rebirth expressed in the most naturalistic manner possible — not for nothing did Allan Kaprow call Nitsch the “Grünewald of Happenings.”

The exhibition at Stella Art Foundation is a retrospective featuring works from various periods made using various techniques — photo-documentation of actions (from the earliest in the 1960s right up to the present day), his splatter paintings (Nitsch calls them “action paintings”), and a specially-equipped cinema which will screen films documenting Nitsch’s actions and performances.

We are sorry, but persons under 21 years of age are not allowed to this exhibition. Photography and videorecording are prohibited.

The exhibition was made possible by the support of the  Austrian Cultural Forum Moscow.

my great veneration for stefan george and klimt and my conviction that artistic practice is an activity to be equated with the activity of a priest, moved me as early as 1960 to put on a smock-like, simply-cut, white paint shirt during my painting actions. wearing the shirt later gained importance while grappling with the relics of the o. m. theater.

descending into the excesses of the ecstatic the actor speckles and splashes the painting surface as spontaneously as possible determined by his intensity and excitation.

often even more spontaneous than can be accomplished on the painting surface, the intensity slathers itself on the SHIRT. it is automatically befouled, besmirched, besmeared, bedaubed, bespattered with blood (red) with every color of the rainbow, the color spectrum.

what happens during the painting action is plotted as on a seismograph, more decisively, because compulsively ordered thinking is shut off. the provoked, conceived accident rules alone, only the intensity of the event shows itself incorruptible, indisputable.

the shirt becomes damp with the “sweat and blood” of the paint. wet, chromatic bloodstains of painted blood are formed and cling to the naked body of the painter. rapidly evaporating turpentine becomes serum. the paint becomes green, blue, purple, black blood. the descent of the painter in direction of the unappetising, of perversion, death, murdering, sacrificing, being-murdered, being-sacrificed. his descent in direction of the orgiastic, frenzied sexuality, down into the abyss and danger of experiencing, the base energies determining us, becomes visible in the blood-colored fallout on the shirt.

it is as if the painter prising open our inner abyss comes close to sweating blood, to draining the cup of sorrow, to the flagellation, the crucifixion, the dismembering of dionysus, the blinding of oedipus during the painting action. his priest shirt, his sacrificial shirt is marked by the damp stamp of kenosis.

I AM THE PAINTER WHO PRESSES THIS GLORIOUS WINE FOR YOU. MY SHIRT IS RADDLED AND BEARS THE WET TRACES OF MOIST SQUASHED CRIMSON, BLOODY FLESH OF THE GRAPE, OF THE FERMENTING stewing, steaming MASH. it is bespattered by fermented, benumbing into the intoxication of madness, musty, fresh wine.

I AM THE PAINTER who HUNTS AND SLAUGHTERS the ANIMAL (beast, god-animal, bull of mythras (dragon) totem animal) FOR YOU. i rummage with both HANDS IN THE BLOOD-SOAKED FLESH OF ITS ENTRAILS AND BESMIRCH MY SHIRT WITH EXCRETMENT BLOOD AND GUILT.

the shirt is often hung on a picture as the ultimate decoration and trophy to enrich its chromatic texture. there are paintings which need no shirt, others demand one. both paintings and shirt can exist alone. should i find a shirt unsatisfactory, it is painted over with harsh gestures.

written in Asolo in the last week of september 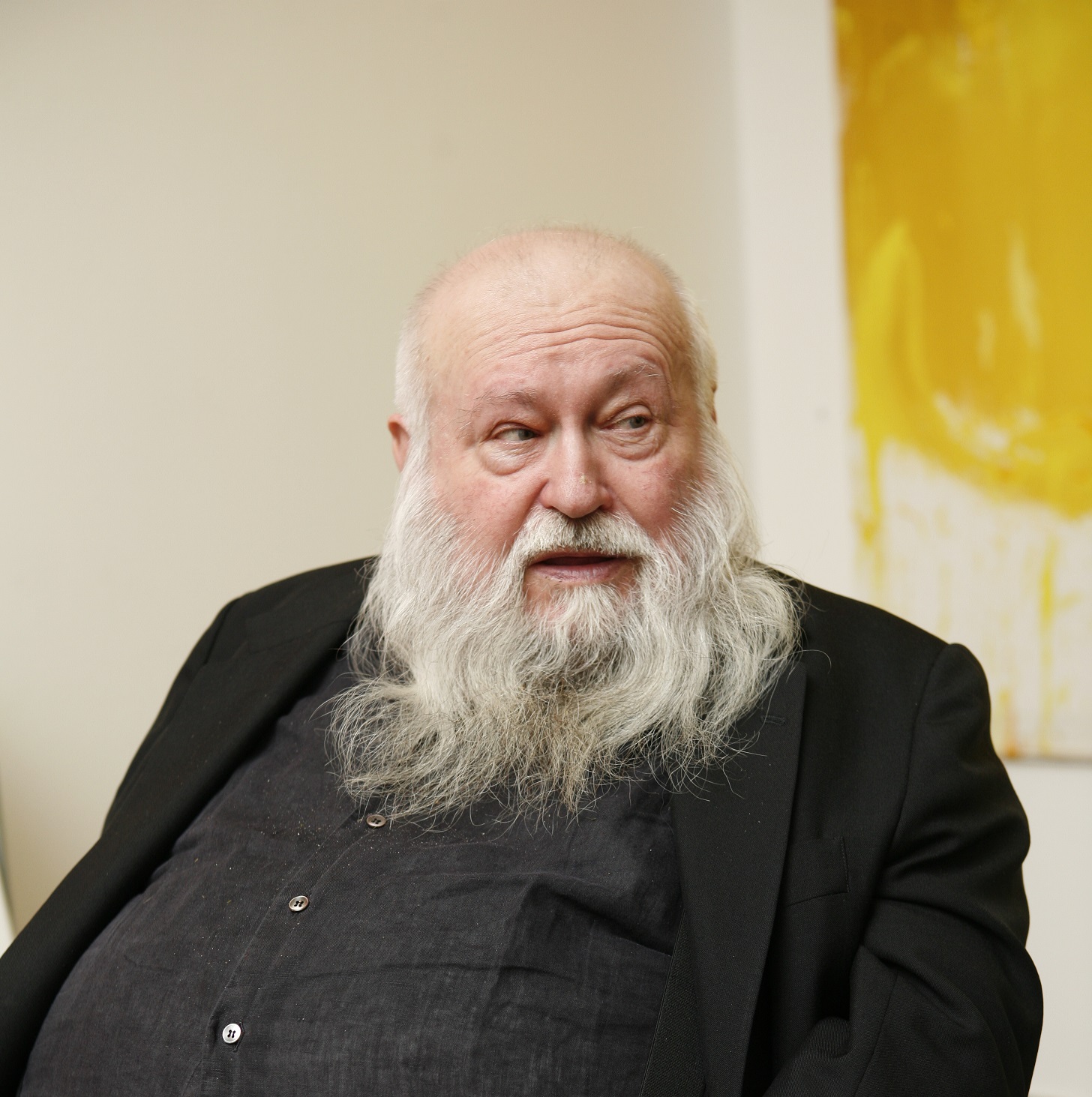 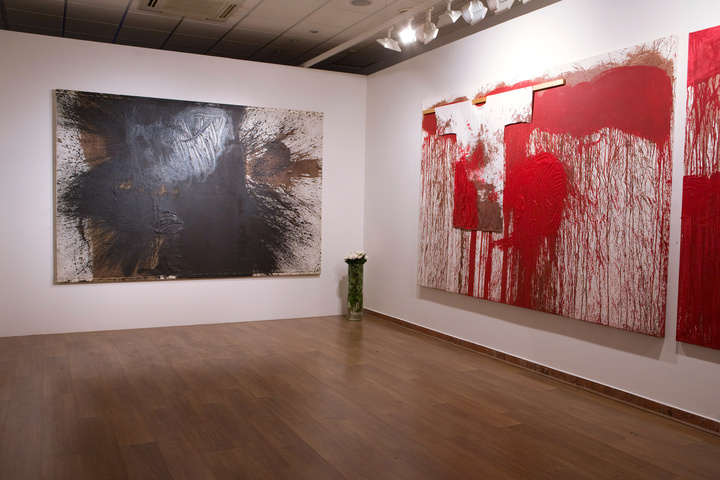 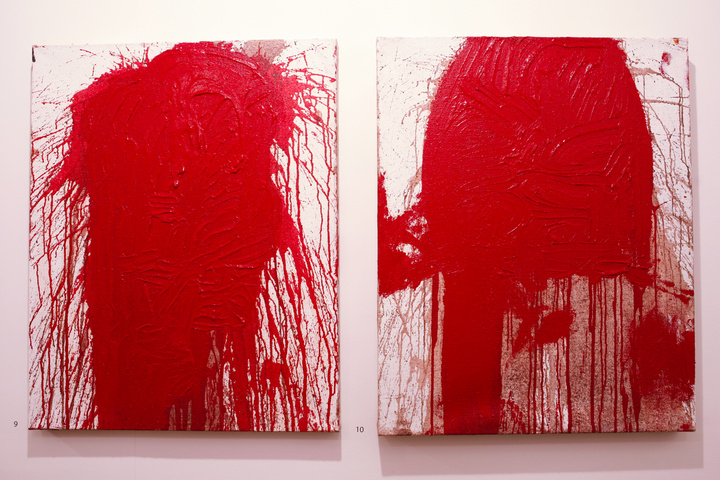 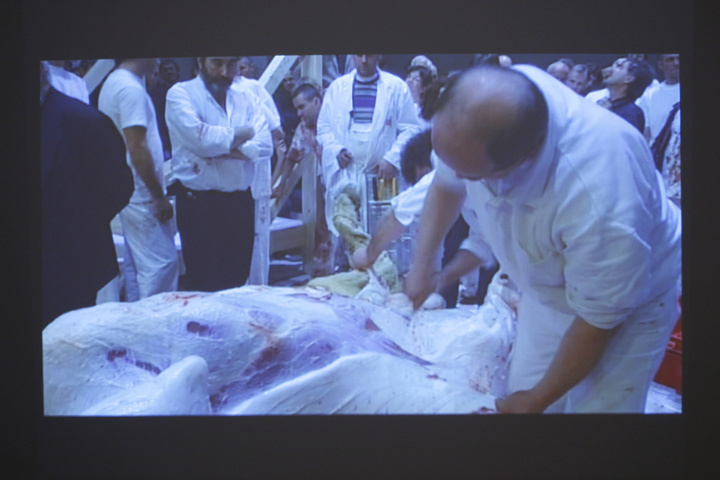 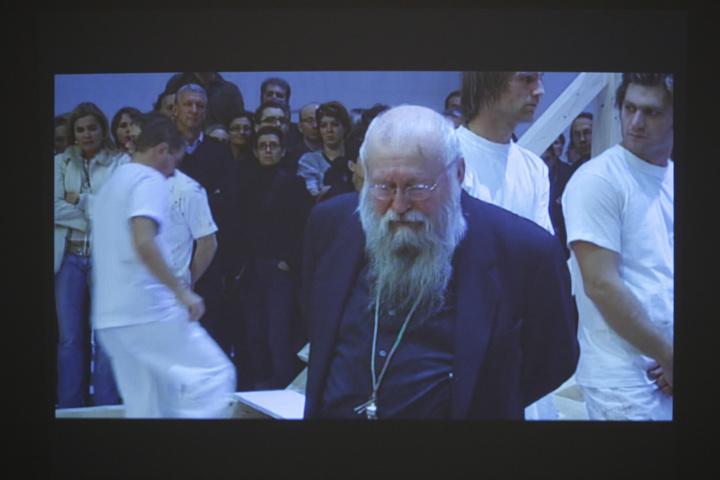 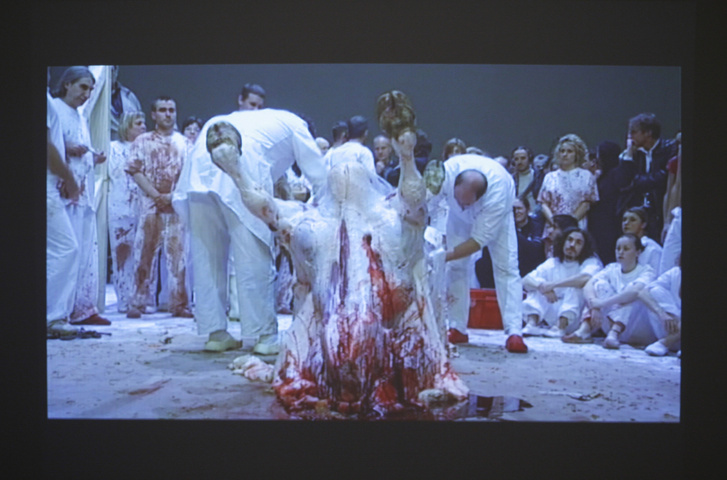 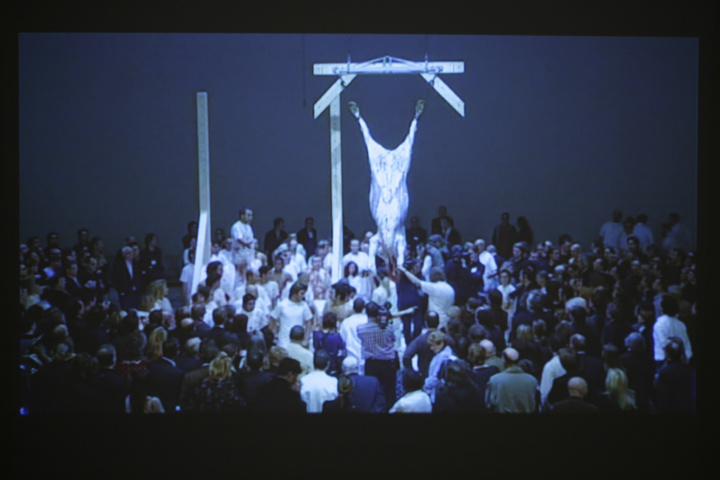 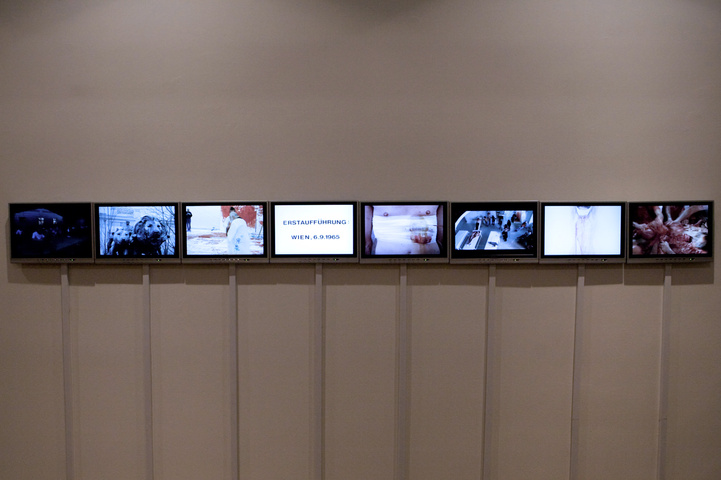 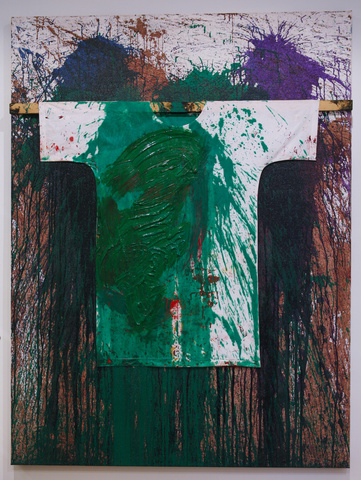 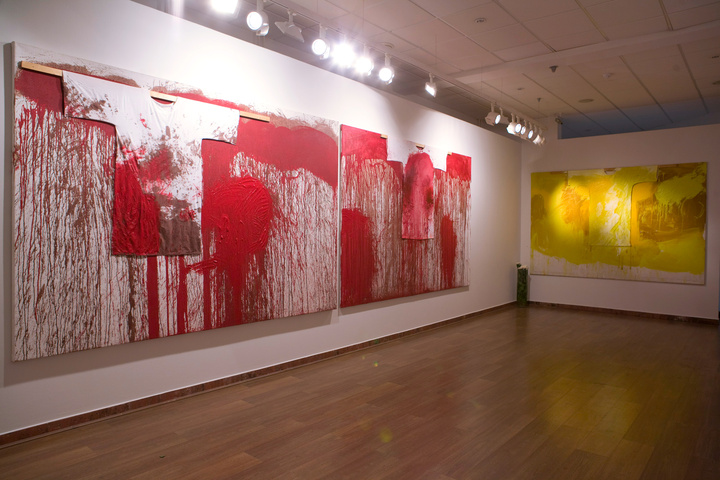 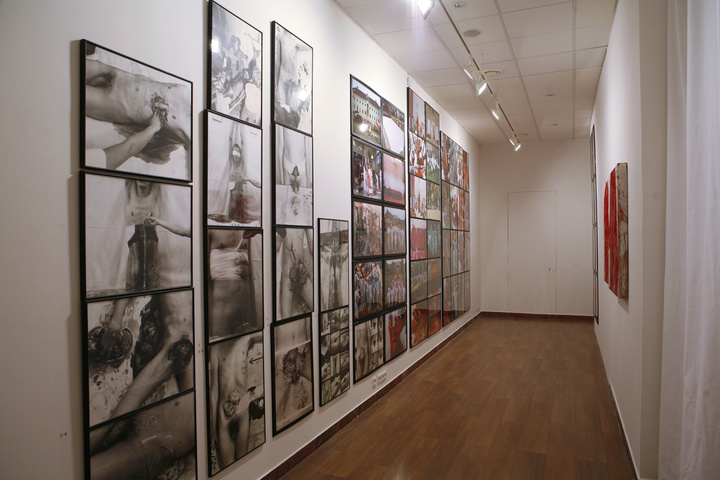 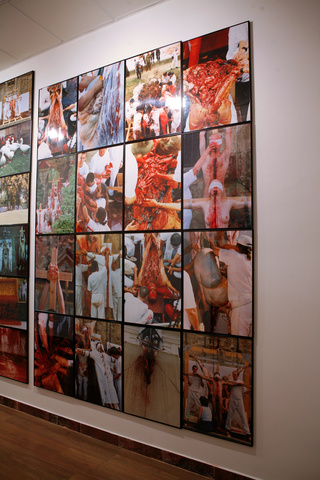 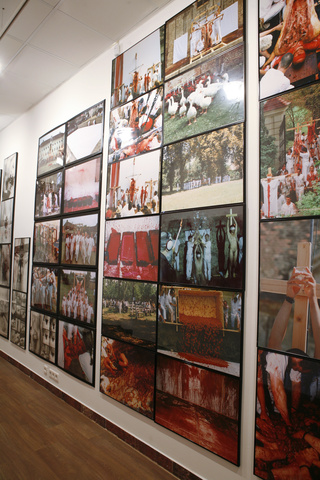 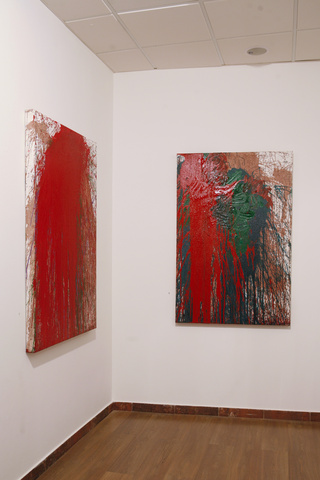 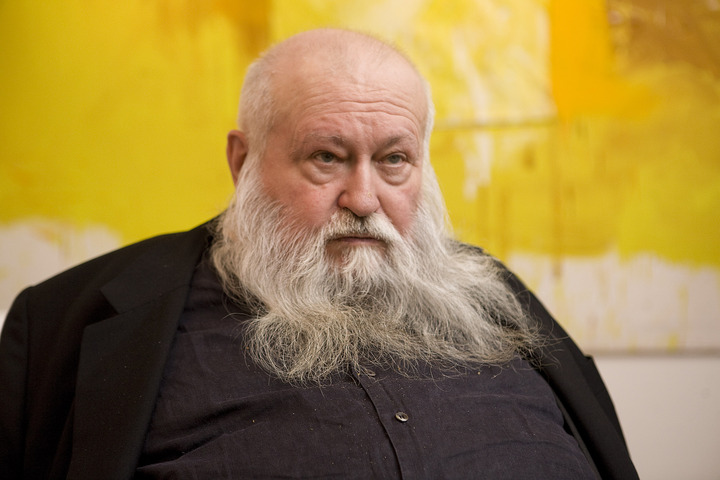 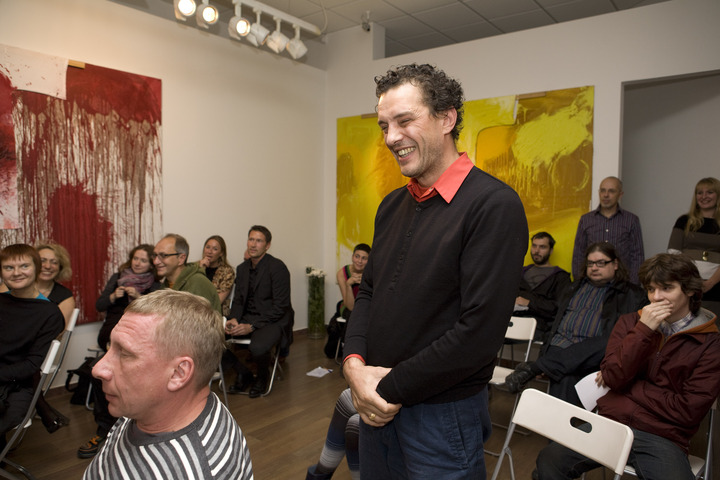 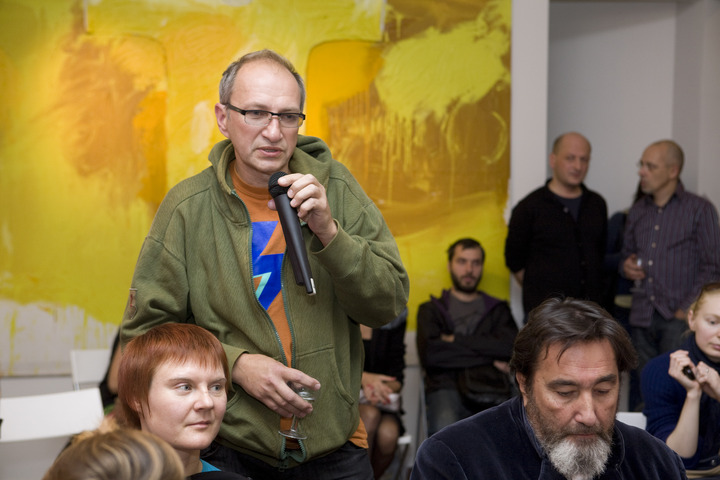 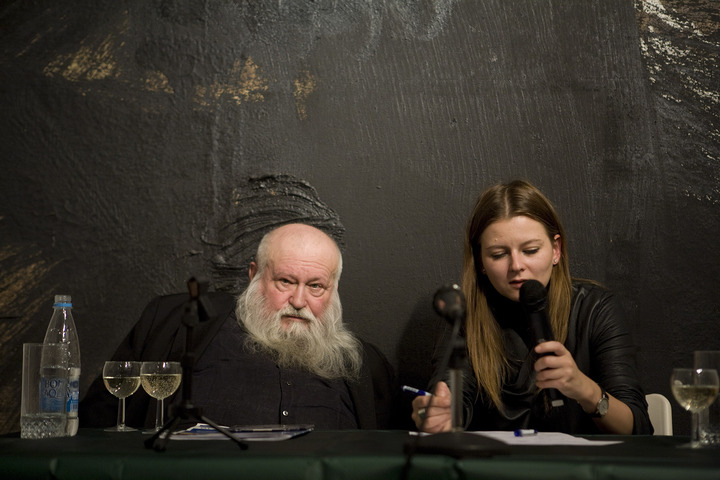 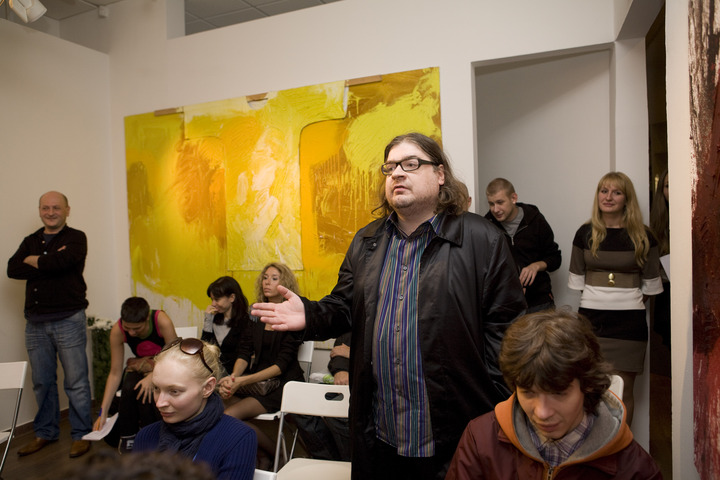 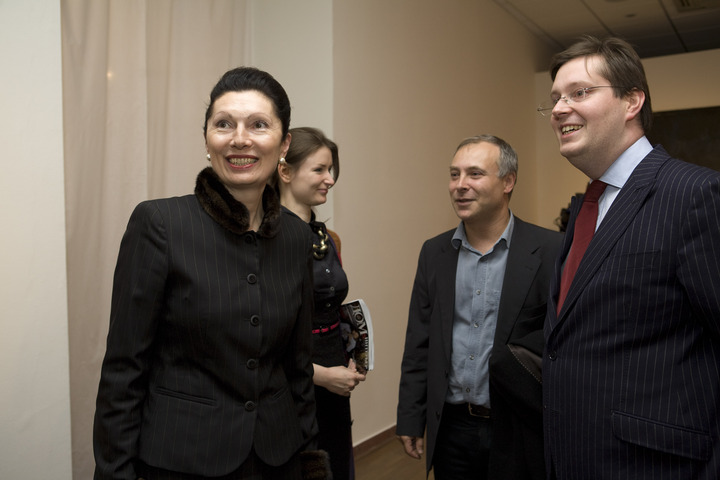 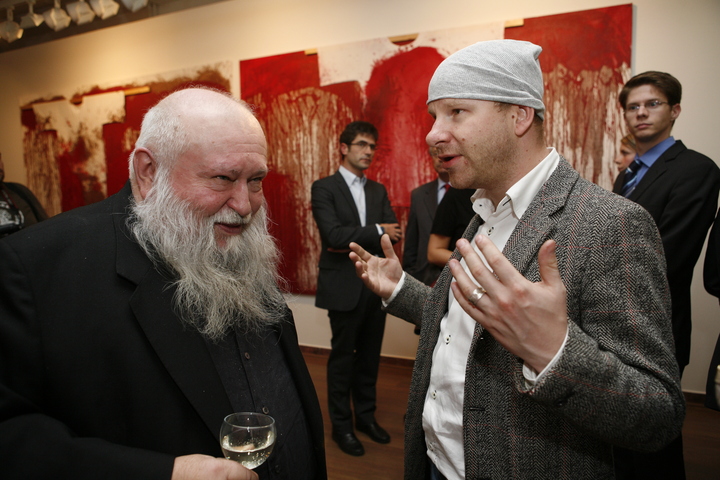 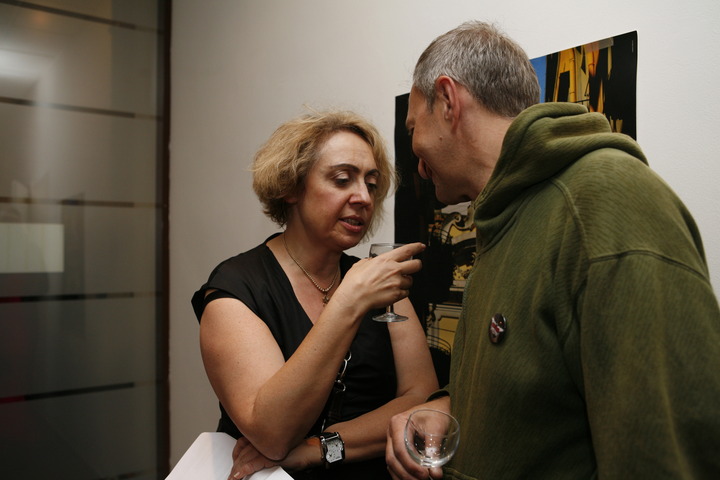 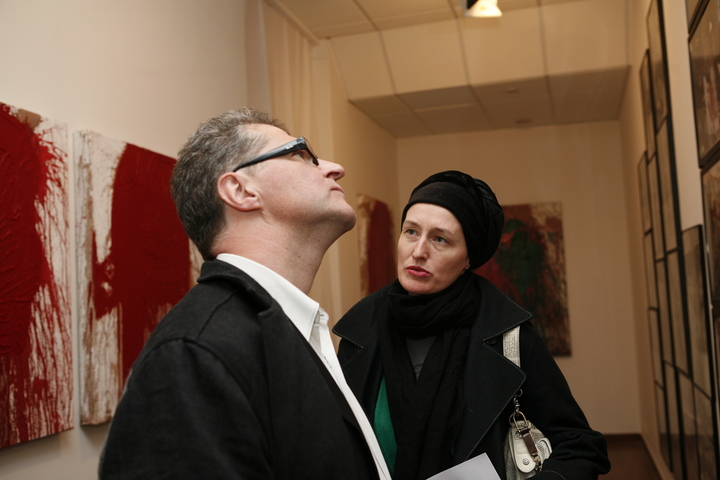 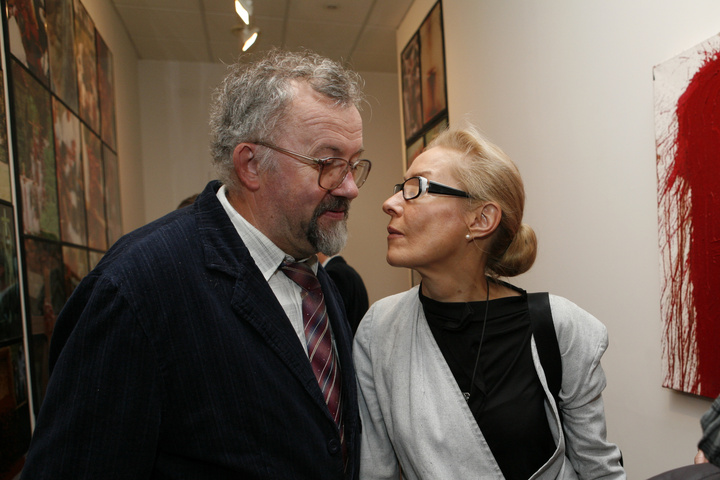